Albert "Al" Tuttle, originally named Bob Tuttle, is a neighbor of the Smiths that Steve used to do odd jobs for whose wife had passed away.

Bob is introduced in "Homeland Insecurity", where he mentions his wife had passed away of "the big C" - when a giant letter 'C' from a sign had fallen on her. Francine and Tuttle both refer to Bob's wife as Betty. Bob is one of the guests at Stan's 'pool party' that becomes a terrorist prison camp.

He is one of the parties that Stan finds he isn't liked by in "I Can't Stan You".

He is part of the tour of the Parade of Homes in "Meter Made" and attends Hayley's wedding in "Haylias".

He attends the Homeowners Association meeting in "Roy Rogers McFreely".

In "Don't Look a Smith Horse in the Mouth", not only has his name been changed to Al Tuttle, but Steve picks up a picture of Al next to his wife's tombstone which instead reads Lisa Tuttle. When Steve and his friends decide to see if a neighbor has any new odd jobs for them to do, They find he has become a morbidly obese shut in. After working out around the house, he gets Snot to try to get them money from his wallet and Snot becomes trapped under him. To free Snot, they harness up Stan's body with a horse's brain and manage to lift Snot free. They find they were tricked into staying because he was lonely. Steve manages to use Horse/Stan to pull Al out to where he can interact with other people again.

He is seen again in "A Jones for a Smith", sitting in his garage so he can interact with the neighbors.

Linda Memari appears as slave Princess Leia to Tuttle's Jabba the Hutt during "He's Got a Kink" in "The Missing Kink".

A significantly thinner Al voices support for the new arena in "Roots" and is one of the savage survivors in "The Two Hundred". He is also listed as a possible owner of the mineral rights under the Smith property in "Mine Struggle".

He buys a Corvette in "Bahama Mama" when he turns the same age as his dad when he died. Stan mentions that Tuttle had a crush on Klaus in "Kloger".

Al is foreman of the census enumerators in "The Census of the Lambs", one of the egg protectors in "Shell Game", attends the town meeting in "The Mural of the Story", Francine's dinner party in "Death by Dinner Party" and appears in Klaus' rap video in "The Never-Ending Stories".

Stan forces him into hosting the Smith family game night in "Flavortown".

Tuttle becomes a father figure to Snot in "The Legend of Old Ulysses", and takes him to camp at Possum Lake. when the pair dominate the camp events that Steve and Stan usually win, the former sets out to break them up. When this upsets Stan, Steve pairs with Tuttle for the camp boat race. When Steve starts to feel regrets that he may have hurt two people close to him, things go crazy when Old Ulysses decides to attack the regatta, wrecking boats and swallowing Tuttle in the process after being accidentally knocked overboard by Steve in his attempt to save his dad. With Stan is knocked out cold from one of the fish's attacks, Steve is able to revive him with Tuttle's stash of energy drinks. Together, they fashion a hook out of an anchor and managed to land Old Ulysses, freeing Klaus and Tuttle well.

In "Rabbit Ears", Tuttle is the last remaining member of a group that meets to discuss the show Nighthawks Hideaway. He desperately explains to Stan that there's only one episode of the show, and that it changes every time you watch it. Stan later witnesses Tuttle become part of the show and eventually follows him in. Together, Tuttle and Stan attempt an escape, but when they step into the Smith Home, they are immediately returned to Nighthawks Hideaway. After Alistair Covax knocks Stan into the wall, it reveals static, which Tuttle and Stan climb out through, back into the real world. Tuttle defeats Alistair Covax by unplugging the television, rescuing Stan from being pulled back into the Hideaway.

When Stan and Roger are at the Langley Falls Shopping Mall in "The Hall Monitor and the Lunch Lady", they witness Carbunkle being mutilated by the escalator and their faces are frozen in shock, after which Tuttle approaches and attempts to engage them, mistaking their shock for indifference. Later, Stan and Roger, alongside Hayley and Francine, see Dr. Ray Petit die the same way, all becoming frozen in shock as Tuttle once again attempts to engage.

Tuttle is a member of the Langley cast of "Stomp" in "Stompe le Monde". 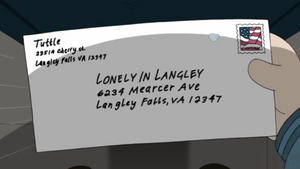 Retrieved from "https://americandad.fandom.com/wiki/Al_Tuttle?oldid=89282"
Community content is available under CC-BY-SA unless otherwise noted.