For a complete script, see: "Adventures in Hayleysitting" on the Transcripts Wiki

Hayley: I'll watch Steve. [everyone cracks up] Why is that funny?

Steve: Dammit, it's true! I'm not wild.
Toshi: [in Japanese] What if we ordered up some whores?
Snot: I don't know what you just said, but you said it in Asian.

Barry: How's this for crazy? [He grabs a pot of water boiling on the stove and dumps it over Snot] You just won the Super Bowl!
Snot: [screaming] It's boiling!!
Barry: Gonna be a fun night, guys.

Stan: You look like that little slut from Tangled.

Hayley: Now go up to your room and play with yourselves.

[Hayley runs out of gas driving Francine's car chasing after Steve and his friends]
Hayley: Son of a bitch! I was supposed to get gas.
Jeff: Did you?

Barry: [seeing his blood pressure is 230/125] I gotta make some real changes.

Meth Addict: Where the hell's the receipt?! 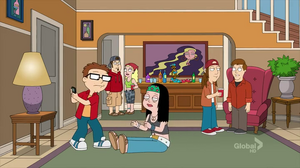 [Hayley's phone rings]
Hayley: [drunkenly] It's Dad.
Steve: [grabs the phone] Give it to me. You're gonna get us both in trouble! [answering the phone] Hey, Pop.
Stan: Steve? What's all that noise?
Steve: Oh, me and Hayley are just playing a game called "Black Restaurant."
Stan: Sounds fun!

Roger: That's what you get for tangling with a Honda. Every time.

Police Officer: Let's go down the list. Tags expired. Too young to drive. The drunk prostitute next to you isn't wearing her seatbelt.
Hayley: [drunkenly] He-e-y!

Hayley: You guys should head home.
Barry: So we're not reporting any of the murders we saw tonight? I'm cool with that. I'm just checking.

Retrieved from "https://americandad.fandom.com/wiki/Adventures_in_Hayleysitting/Quotes?oldid=88207"
Community content is available under CC-BY-SA unless otherwise noted.