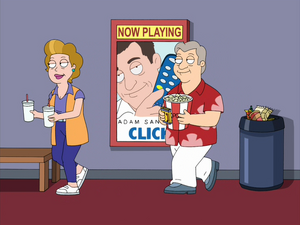 Sandler appears on a movie poster for Click on Betty Smith's date with Jerry in "Oedipal Panties". Stan reaches through the poster to kidnap Jerry to keep his mother for himself.

Roger refers to Sandler as a "Jewish nerd" along with Steven Spielberg and David Schwimmer in "Santa, Schmanta".

Stan has a movie poster of Happy Gilmore framed in "Salute Your Sllort". Eager to show it off to everyone, Francine suggests hanging it on the outside of the main door.

Retrieved from "https://americandad.fandom.com/wiki/Adam_Sandler?oldid=89289"
Community content is available under CC-BY-SA unless otherwise noted.