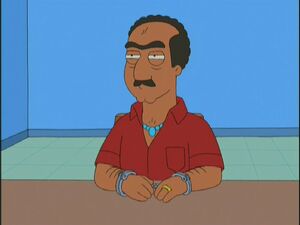 Achmed al-Paula Abdul al-Paul Anka al-Casey Kasem bin Shakira is a terrorist bomber for Arabs for Chaos in "Failure is not a Factory-Installed Option". Stan manages to figure out that his wife has quit caring about him and manages to get inside his head to spill his secrets.

His name contains the names of several American celebrities with Middle-Eastern heritage.

Achmed is voiced by Fred Tatasciore.

Retrieved from "https://americandad.fandom.com/wiki/Achmed_al-Paula_Abdul_al-Paul_Anka_al-Casey_Kasem_bin_Shakira?oldid=51145"
Community content is available under CC-BY-SA unless otherwise noted.