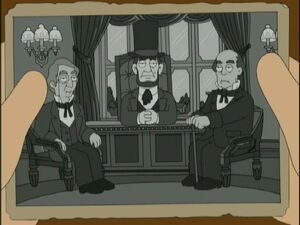 Abraham Lincoln (February 12, 1809 – April 15, 1865) served as the 16th President of the United States from March 1861 until his assassination in April 1865. He successfully led his country through its greatest internal crisis, the American Civil War, preserving the Union and ending slavery. Before his election in 1860 as the first Republican president, Lincoln had been a country lawyer, an Illinois state legislator, a member of the United States House of Representatives and twice an unsuccessful candidate for election to the U.S. Senate.

As an outspoken opponent of the expansion of slavery in the United States, Lincoln won the Republican Party nomination in 1860 and was elected president later that year. His tenure in office was occupied primarily with the defeat of the secessionist Confederate States of America in the American Civil War. He introduced measures that resulted in the abolition of slavery, issuing his Emancipation Proclamation in 1863 and promoting the passage of the Thirteenth Amendment to the Constitution.

Six days after the large-scale surrender of Confederate forces under General Robert E. Lee, Lincoln became the first American president to be assassinated.

In "Black Mystery Month", Abraham Lincoln invents peanut butter, or more correctly, Mary Todd Lincoln invents it to ward off spirits, and plans to use it to win over the South by reporting a black man invented it. His assassination at the hands of John Wilkes Booth delays this until President Grover Cleveland leaves a jar of the peanut butter on George Washington Carver's doorstep.

Abraham Lincoln appears at Jesus' birthday party in "The Most Adequate Christmas Ever".

While trying to get past the Drama Club in "Escape from Pearl Bailey", Barry notes that actors killed Lincoln.

In "Fartbreak Hotel", the brochure that Héctor Elizondo accidentally shows Steve and Francine before giving them the one on time travel reads "THE PRESIDENTIAL PENIS MUSEUM - Meet The REAL Heads of State!" with a picture of Abraham Lincoln and George Washington looking inside their pants.

In "The Mural of the Story", Lincoln appears on the town mural as an example of an upstanding American. When it is defaced by vandalism, Stan proposes a task force to restore it, and uses Hayley as en example of the youth that needed the inspiration. When Stan's group blows the money on a dinner for the group, he tries to restore the mural himself and botches the job.

Retrieved from "https://americandad.fandom.com/wiki/Abraham_Lincoln?oldid=77133"
Community content is available under CC-BY-SA unless otherwise noted.