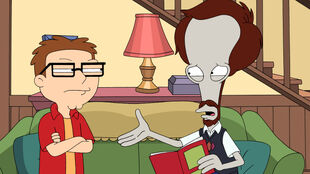 Steve is getting mad at Roger

A Ward Show
Roger becomes Steve's legal guardian, but gets a little overzealous in the parenting department.

Roger's Disguise: Jockey from "Don't Look a Smith Horse in the Mouth" 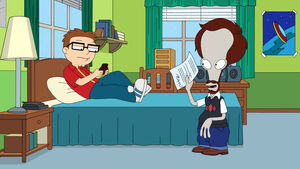 Steve is best friends with Principal Brian Lewis. Steve also helps him with his accounting in return and they belittle the teaching staff. Later, Roger becomes Steve's legal guardian so Stan and Francine can get out of a coffee meeting with Lewis. At the meeting, Roger attacks Principal Lewis for Steve's poor test scores. Not satisfied, Roger later brings in the superintendent and they see that Lewis is taking Steve out of classes for get-togethers in the teacher's lounge and as a result, he is fired. When Steve protests that Principal Lewis was his friend, Roger tries to make up by getting him a new Friend named Freddie. Later, the other teachers unleash their wrath on Steve as payback now that Lewis isn't around anymore. Roger responds to this by rigging their cars with explosives, killing them. Steve is extremely angered at Roger for getting Lewis fired and runs away. He meets up with Lewis and the two drive away to Arizona. However, on the way, Lewis reveals that he's driving the car into the Grand Canyon in a murder-suicide and reveals that he only used Steve for an accountant. Freddie runs into Roger searching for Steve an unleashes an eye-popping scream when Roger panics. Freddie explains that Roger should let Steve make more of his own decisions and stop smothering him as much. Roger catches up with Steve and Lewis before they can drive into the canyon, but it turns out he only came to apologize to Steve. Lewis then drives over the canyon, but Roger's love makes the car fly across the canyon. But then they crash the car in mid-air after a white guy with a black kid also try to drive into the canyon. Both Steve and Lewis end up in the hospital, with Lewis saying that he now enjoys living as he goes to get a sponge bath from a nurse. 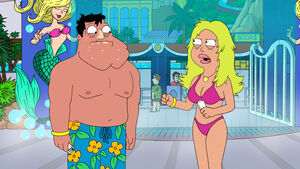 Meanwhile after making Roger Steve's legal guardian, Stan and Francine decide to go on a vacation to Flash Flood Acres, The Largest Water Park in the Universe! But after spend two hours there they go on every ride, so they decide to get a refund from the manager, but fail when they learn he wouldn't be back until Thursday. So they try to sell their eight day passes, but after that fails they decide to get even with the park by having sex in the biggest water slide. But when Stan comes in too fast, Stan and Francine end up in the same hospital as Steve and Principal Lewis with broken pelvises. When Roger takes away Steve's pain medicine, Steve, Stan and Francine start to yell at him until he brings in Freddie to quiet them down with another eye-popping scream.

Retrieved from "https://americandad.fandom.com/wiki/A_Ward_Show?oldid=79528"
Community content is available under CC-BY-SA unless otherwise noted.