A Song of Knives and Fire 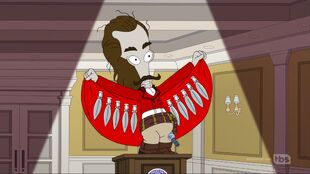 A Song of Knives and Fire
Stan and Francine try to reignite their relationship. 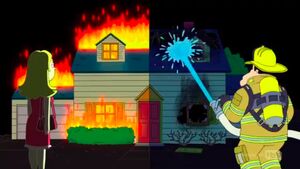 When Stan and Francine are spending a nice day out together, he becomes distracted by an open house at the fire station. But after thoroughly enjoying himself, he finds he forgot to buy a raffle ticket to become an honorary firefighter for a week, which Francine wins. He returns home highly upset, until Francine makes it clear that she intended to give him the prize. However, he later complains that all he gets to do is cook for the other firemen and do grocery runs. When Francine happens to see him in the parking lot of Trader Joe's, she gets the idea of starting a small fire in a dumpster for him. She becomes hypnotized by the flames just as he arrives to put it out. His standing with the other firefighters is elevated, but Francine becomes so hooked that she starts to set other fires as well. Unfortunately, traces of her vodka bottles that she uses to start the fires turn up, and Stan is promoted to investigator. Eventually, his time as a firefighter expires and he's ready to step down, but Francine intends to continue. As she rushes away from his goodbye ceremony, she drops one of her vodka bottles and Stan is able to piece together what is going on. When he calls her up, her clues suggest she's going to set the fire station on fire.

When Stan and the other firemen rush over, they discover no one at the fire station. After Stan rethinks her clues, he pieces together that she's really about to set fire to a dumpster warehouse where they had their wedding ceremony when they got bumped out of a comedy club due to a surprise visit by Ray Romano. They patch things up as the flames climb higher around them, and Stan carries Francine to safety, but is burned badly in the attempt.

Meanwhile, Roger uses an environmental presentation of Hayley's to pitch his knife throwing act, but his first show is a disaster. Trying again, he drafts Steve into his act. Roger actually succeeds this time, and invites the audience to throw knives back at him, which ends poorly.

Previous Episode /// A Song of Knives and Fire \\\ Next Episode