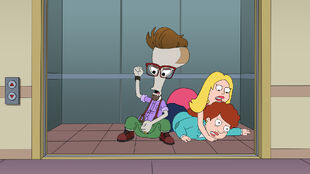 A Roger Story
Steve and Snot's friendship is put to the test. 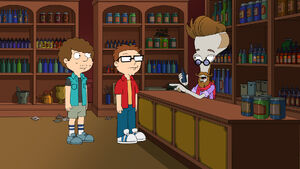 When Esther and Francine have a falling out during their book club, they agree to quit meeting bi-weekly, which puts a serious crimp in Steve and Snot's together time. They enlist Roger's help to get their moms back together, but his initial attempt by drugging them backfires, and they hate each other to the point of demanding the boys quit seeing each other, which is strictly enforced by Principal Lewis at school and at their homes. They manage to escape him thanks to Billy's help and take shelter in an apothecary run by Roger, who provides them with a potion to fake their deaths like Romeo and Juliet. However, he botches this as well, and actually poisons them. 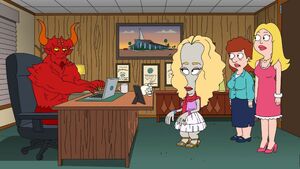 At the funeral, the mothers pledge that they would stay together if they could only have their boys back. When Roger lets it slip that he's the one responsible for their deaths, he informs them that he can get them back if they all journey to the underworld, which is located via elevator at Sub Hub. They manage to locate the boys, but Satan holds them to their promise to stay together for eternity by keeping them in a room in Hell, while everyone who knew them has their memories erased of their existence. Steve and Snot are reunited and eventually marry, completely unaware of their mothers' fate. However, Stan, dealing with short-term memory loss by tattooing mementos on his body, finds a note mentioning Francine that shocks him.