For a complete script, see: "A Piñata Named Desire" on the Transcripts Wiki

Stan: [regarding Roger's suggestion in meeting an acting coach] This is you, isn't it? I'm gonna get down there and it's gonna be you.
Roger: Strong possibility.

Hayley: Yeah, you guys should just fuck and get it over with. Clearly, they have repressed sexual feelings for each other that they're channeling into hostility.

[Barry comes out of the dressing room wearing a pair of pajamas]
Steve: That's the one. Those are the pajamas we should wear for our last sleepover.
Snot: Nah, I dunno. The striped ones are better for hiding pillow-fight boners.

Francine: I don’t get it, they’re friends again?
Hayley: Told you. They just needed to fuck. 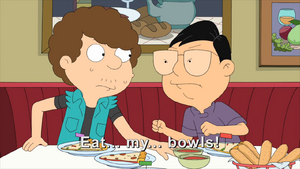 Steve: Ronnie?
Ronnie: That's right. The forgotten fifth member of the sleepover gang.
Steve: But you moved to Scottsdale years ago. How did you...
Ronnie: Let's just say someone sent me an e-mail about what went down.

Ronnie: Tonight we gotta sleep over it. But first, I suggest you all turn around so you can see Steve's mom undressing through that window. Tig ol' bitties.

Steve: [voiceover] We never figured out which one of us e-mailed Ronnie. In fact, to this day I'm pretty sure he was just some black dude who overheard us planning our sleepover in the pizza parlor. But he sure was awesome.
Snot: Oh, my God. Look at Ronnie.
Steve: You're doing it, Ronnie! You're doing it.

Retrieved from "https://americandad.fandom.com/wiki/A_Pi%C3%B1ata_Named_Desire/Quotes?oldid=88149"
Community content is available under CC-BY-SA unless otherwise noted.