A Jones for a Smith 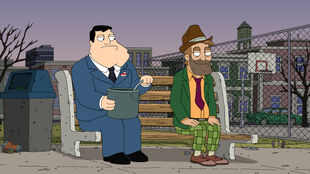 A Jones for a Smith
Stan develops a crack addiction.

Roger's Disguise: Jacob from "An Apocalypse to Remember"

Stan puts down liberal social programs because he thinks they’re a waste of money, more importantly, he believes it keeps people from solving their own problems. When Francine, gets arrested for an illegal U turn and drunk driving after she had drinks with Greg and Terry, she is sentenced to work in a soup kitchen. Stan is furious because he believes that everyone should help themselves and he helps himself to the pot of soup. Nursing a cold, he is offered 'medicine' by a street dealer and suddenly feels much better. Supercharged he blasts his way through the CIA training course until Roger informs him he is on crack. Stan is convinced he can quit on his own but finds himself becoming more and more addicted. He steals from his family and friends but gets caught trying to rob Greg and Terry. An overeager hostage negotiator gives him money and a plane and he heads to Columbia where he soon finds himself destitute. A street punk tries to rob him but can't do it without help. Stan realizes that getting help does not make you weaker. He returns to Langley Falls and goes into rehab, coming out clean.

Steve meets the girl of his wet dreams and finds out that even her father is on board - once he meets Steve's parents. Desperate for a crack fix, Stan tries to steal and then offers to perform an unnatural act on the father, ruining Steve's chances. Steve says he will hate Stan until the day he dies.

Previous Episode /// A Jones for a Smith \\\ Next Episode