A Boy Named Michael
Roger moves in with Greg and Terry.

Roger and Stan spend time together as Stan tries to wear out his chair in order to get Francine to let him buy a new one. Greg and Terry reveal in their newscast that they are adopting a Russian boy named Michael. Going to their house to celebrate the new arrival, Roger is overwhelmed by the extravagance and decides he wants to be a part of it. Seeing the expensive gifts, he becomes humiliated by his tote bag gift and is further embarrassed by Stan's antics. He blows up at the family and their low standards and storms out. He gets to the airport and takes the place of Michael.

Living with Greg and Terry, he finds their standards are pretty high as Stan tries to talk him into returning. He offends Stan by telling him that he has given him nothing in his life and calls for Greg and Terry to have him removed. At breakfast, Greg and Terry squabble over breakfast and Terry reveals that he has lower standards than Greg to Roger's horror when he treats them to Ho-Hos. Stan gets his chair and it is everything he dreamed of. When he is insulted by Roger, he starts living on the front lawn like the type of low-class person Roger accuses him of being. Over dinner, Terry actually admires Stan's chair and talks Greg into getting them one. Horrified, Roger decides he has to kill Terry to keep his better life. 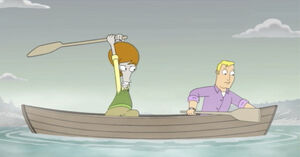 As Stan continues his game, he observes Roger attempting to cut Terry's brake line on his car and tries to warn him, but Roger cries that Stan is threatening him again and he is turned away. Stressing out over posing for their Christmas photo, Terry talks them into relaxing at their lake house. When Greg confers with Terry over the Ho-Ho wrappers, they blame Michael and Terry decides he has to kill him to keep it a secret. In a boat together, their tricks reveal their intents and they fight, with Terry knocking Roger overboard to what he believes is his death. After Terry calls Greg, Roger finds that Greg is also happy to find that he is dead as he slips back into the water. Rescued by Stan, he apologizes and they go out for Pizza Poppers together. Seeing the report on the news of Michael's death, Roger reveals that he had one last bit of revenge planned as he poses as his own drowned ghost to scare Terry, and attacks his own mirror reflection who has been a thorn in his side.