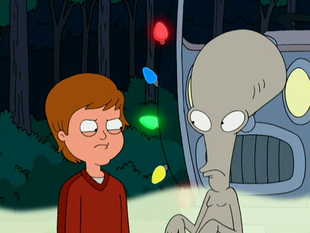 A.T. The Abusive Terrestrial
Roger is rejected by Steve.

Plot: Steve refuses to hang out with Roger anymore. So Roger wanders the streets and finds a little boy named Henry who befriends him. However, the relationship turns abusive and Roger shows stereotypical signs of denial.

Meanwhile, Stan and Francine learn that Mr. PiBB is being discontinued. They take it on themselves to save their favorite drink. Eventually, the real Mr. Pibb tells them that soft drinks come and go; "what really matters is who you drink them with". All is well until they discover the PiBB-mobile is missing. Hayley and Steve have stolen it in a scheme to disguise it as a spaceship coming to take Roger back to his home world. Roger convinces his abuser that the ship is real ensuring that he can break off the relationship without fear of being tracked down in the future. However, Henry finds out it is fake and tries to apologize after hitting Roger. Steve convinces Roger to come home as he is his best friend. He then kicks Henry in the groin and they drive away.