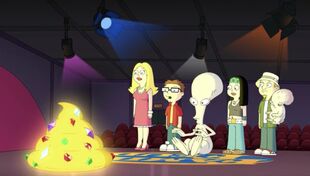 300
Roger's past comes back to haunt him. 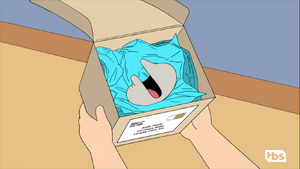 When the family gets invited to be on Family Feud, they need to come up with something funny that has happened to them as part of the application. But every thought turns into something that Roger has done to screw things up, which culminates in Roger tearing up their application and he is kicked out of the house. Meanwhile, religious leaders discuss how to get rid of The Golden Turd, which requires its reinsertion into Roger's anus. However, their squabbling results in their deaths and a young delivery girl picks it up, untainted by its influence. She is directed to finish what was intended and succeeds, resulting in peace throughout the world as Roger is shattered into 300 pieces. As the family begins to get annoyed with the peace, Roger's mouth is able to direct itself to be mailed back to the Smiths, and they set out to find his missing pieces to restore things to the way they used to be. 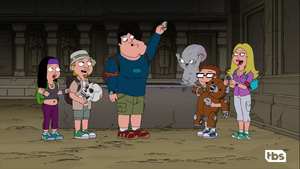 To make him easier to deal with, they sew each assembled piece to a stuffed bear as they search the world. When they come down to his last piece...his butthole, they find they have to play the final 'Fast Money' round of Family Feud with Steve Harvey moderating. After a close call, Roger gets enough points to earn his butthole back, and when he inserts it, the Golden Turd pops out and the world is restored. However, Steve Harvey grabs it, intending to use it to put Family Feud on every channel until he is knocked out by Stan, who claims he's taking it away to destroy it, but actually secrets it away.

Twenty years later, Stan is living in a small town under an alias when Steve catches up with him and demands the Turd. He claims to have given it away, but Steve bashes him in the head with a tire iron and finds his ID with his address. He searches the property until he finds it. But as he is leaving, he is crushed by Hayley in a truck. Hayley's acquisition is short-lived, though, when Francine shoots her. As she walks away, Stan arrives and they struggle for it, with Francine momentarily winning until she is killed when her scarf gets caught in a table saw, breaking her neck. Roger and Klaus arrive, with Klaus joking about falling under the spell of the Turd. As Roger sheds a tear for the family that lands on it, he is able to see the moment he pooped out the Turd and tells his past self to bury it so no one can get it, and past Roger and Steve set out on a road trip to Boca Raton. Things return to the present just as the Smiths receive their application for Family Feud, which Roger proceeds to destroy all over again.

In the epilogue, a boy tries desperately to win the turd in an arcade crane game, until his mother pulls him away, but not without a look of avarice as they walk.

Retrieved from "https://americandad.fandom.com/wiki/300?oldid=91660"
Community content is available under CC-BY-SA unless otherwise noted.