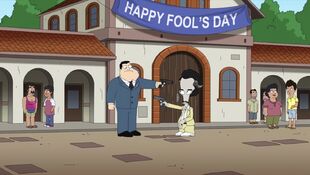 100 Years a Solid Fool
Stan embarrasses himself while on a mission in Colombia.

Roger's Disguise: Jesse from "Cheek to Cheek: A Stripper’s Story" 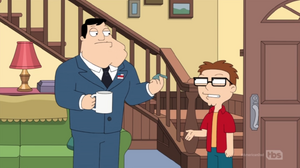 When Steve needs to get his library card laminated, Stan insists on driving all the way to 'Little Colombia'. As he exposes his knowledge of Colombia, Hayley questions his source. He tries to deny being in Colombia at first, but then decides to tell the whole tale...

While intercepting drugs in Miami for the CIA in the 1980s, Stan's gung-ho ideas send his team to Colombia to bust a drug kingpin, El Narco. Roger ends up on his team, to Stan's ignorance, as a translator and further reveals himself to be El Narco that they were searching for. Despite his entire team being killed, Stan refuses to give up and continues to be determined to bring him down by exposing his drug dealing to his people who adore him. During a festival to celebrate El Narco's victory, Stan tries to expose his drug-dealing but instead ends up embarrassing himself further. When El Narco makes a mistake and blows up one of his own cars, the villagers suggest blaming it and their problems on 'the fool' and turn the celebration into an annual event. 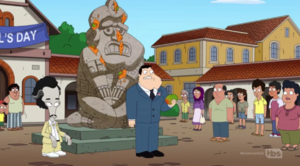 Back in the present, the family makes Stan realize that Roger was El Narco all along. In addition, the celebration of 'The Day of the Fool' happens to be going on in Little Colombia that day and Stan is recognized, so he decides to take Roger back to Colombia to correct his mistake. However, once they get there, Stan screws up again and makes himself an even bigger fool. Feeling depressed, a little boy helps Stan realize that having a fool to blame their problems on helps them out, so he tries to get into the spirit of things, accidentally getting hit by four ricochets from his gun as he fires at a statue of himself. Back home again, he buys some statues from the street festival but knocks over several on display and flees pants-less as the cops give pursuit.