Announcer: Tonight in honor of the 100th episode of American Dad!, tragedy will strike Langley Falls with death! 100 times! [A death counter appears with a silhouette of Roger as the Grim Reaper] That's right! 100 of the characters you've come to know and love will die!
[Roger steps in front of the curtain looking and laughing like the Crypt Keeper until he coughs and holds up a cigarette]
Roger: For Pete's sake, these things are gonna kill me. [the counter almost goes up to "001" until Roger hits it] But not tonight! No, tonight, we're gonna find out "Who Shot Mr. Burns"! [to someone offstage] What? Fifteen years ago? Who was it? ... Really, the baby?! [sighs] I want a baby.

Steve: Okay, how about this for a case: Wheels's ex comes to town, looking for whoever poisoned her race horse.
[Roger gives an uncertain mumble. Steve thinks for a moment, then comes up with a new idea for a case]
Steve: Hey, what if I'm visited by the ghost of my dead father, who also used to be a detective?
Roger: So we're just saying the first thing that comes into our minds? Okay. Tickle monster!
Steve: [To someone invisible beside him] I know, Dad, I have to deal with this every day at the agency.
Roger: YOUR GHOST FATHER IS NOT HERE!!!
Steve: Oh no? Then who's... [gets up from his wheelchair] ...possessing me!?
[Steve begins slapping Roger in the face over and over by flapping his arm by Roger's face]
Roger: Stop it... Stop it, Wheels... Stop it...! Wheels...! STOP IT, WHEELS'S FATHER!!!

[Jeff and Hayley are in Hayley's school]
Hayley: Jeff, what are you doing here?
Jeff: Look...
Science Teacher: [cuts Jeff off] Hey! [Camera pans out to show him standing beside a blackboard which has 2 + 2 = 4 on it] Who solved my theorum? Which one of you is the genius?! [points to the Slow Janitor, who is holding a piece of chalk] You there!!

Francine: Stan?
Stan: Did I... Did I turn back time?
Francine: No. You fainted and bashed your head on the counter.
Stan: I'm...I'm pretty sure I turned back time. You must be Francine's grandmother! One day, your granddaughter will make me a moderately happy man.

[Stan reveals a huge computer behind a bookshelf]
Stan: I had tracking devices implanted in the base of the kids' skulls when they were born. Hayley's heading north! It's only forty minutes away!
Francine: Let's go! Which way is north!
Stan: [points straight ahead] That way!
[Francine runs straight ahead into the wall]
Francine: It's a dead end!

Hayley: Jeff, I don't wanna go to Mexico! Okay, that's your plan! We need a plan we can both be excited about!
Jeff: A new plan... New Mexico!

Newswoman: A $50,000 reward to anyone who can stop the marriage! The girl has been described as a likely women's studies major and probable roller derby captain, while the male is your classic run-of-the-male stoner. Here is an artist's rendering of the couple. [Shows a rendering of Velma and Shaggy from Scooby-Doo]
Jeff: Zoinks!

Reginald: Now you gonna apologize?
Bullock: I apologize... to the maids at the Red Roof Inn who had to clean the curtains after I wiped Hayley's excitement all over them!
Reginald: [shocked] You have a mother...and you just said all that. I'm gonna call your mother and tell her you just said that.
[Reginald grabs Bullock's cell phone and runs off with it]
Bullock: [strained] Don't. 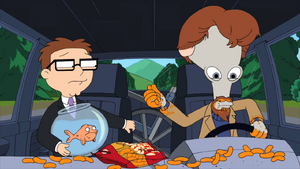 Roger: [comes into the car with a shopping bag] Alright, I've got everything we need. Chocolate milk, some cheese puffs, and some Turkish amphetamines I scored in the bathroom.
Steve: Whoa! Whoa, Legs, you sure that's a good idea?
Roger: I've never been more sure of anything in my life. [Takes an eyedropper of the amphetamines and puts a drop of it in his eye] See? Everything's in moderation. Now, I'm gonna have five cheese puffs. No more.
[Cuts to some time later. Roger is stoned and driving the car crazily while stuffing cheese puffs]
Steve: Legs, please, just pull over!
Roger: Why are you calling me Legs?! Is there something wrong with my legs? Is that why there's a wheelchair in the car?!! WHAT DID YOU DO TO MY LEGS YOU NAZI WALRUS BASTARD?!!!
[Roger sees Steve as a walrus in Nazi attire, and Klaus as Garfield stuffed in Klaus's fish bowl]
Klaus/Garfield: Steve, who is he talking to?
Roger: Shut up, Garfield! Why...wh...why do you... Why do you hate Mondays? You don't even work!

Roger: Well, that was quite a ride Wheels, but I think I got us there.
[The camera pans out to show that the car is on a barge in a river]
Roger: Hey, I see Hayley! [It is shown that Roger has actually seen an obese Asian man in a nearby boat, with similar clothes and hair to Hayley] Don't marry Jeff! Case, closed.

Principal Lewis: Bitch, what are you crying about?! I was counting on that money! I can't go back to work now! I took a deuce on my desk! [Rips off his suit] Fuck. Y'all!!!

Retrieved from "https://americandad.fandom.com/wiki/100_A.D./Quotes?oldid=88144"
Community content is available under CC-BY-SA unless otherwise noted.