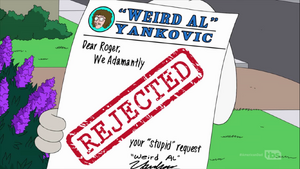 "Weird Al" performs the song "Rabbitage" exclusively for American Dad! in "First, Do No Farm" after Stan and Roger debate the possibility of getting Weird Al to perform it. In the middle of the song, they get a rejection notice calling their idea 'stupid.'